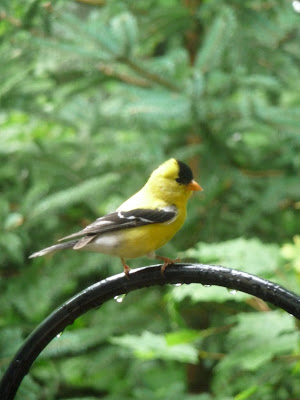 My dear friend Sue was right - the finches came back as soon as the rain stopped. This little beauty stood sentinel while all his "women" filled up on thistle seed. 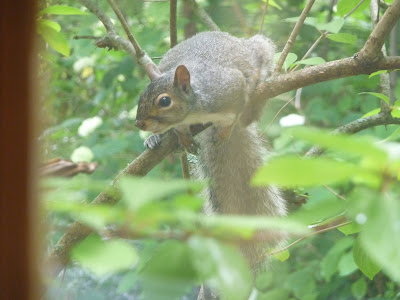 Of course the squirrel - whom I have named Harold - is stealing the bird food. But he's cute to watch too. He is really funny - he attacked a seed bell by hanging upside down and then dropped to the ground to get the little bits he spilled. He hasn't bothered the feeders - just the bell. It's nice to see him high and dry, though. Everytime I have seen him in the past month he has been soaking wet...poor little Harold.


Anyway, a new friend - actually I haven't even met her yet (only talked to her a few times on the phone) - has invited me to go to a benefit supper with her in Lubec. This is for a family who lost all to fire so it is a great cause.
Kind of fun to go on a "blind date" so to speak - I wonder if we'll hit it off? Will we dislike each other from the first moment? Will I want to toss her out of the car half way there? Or will she not like me so much that the entire return trip will be in silence?
We'll seeeeeeeee!

Kiley learned the words boo boo today. My poor daughter was bitten by her cat this morning and spent a couple of hours in the emergency room. The cat has been unwell for two weeks and doesn't seem to be getting better. He has an abscess on his belly and has been on some heavy duty drugs. She was cleaning today and went to pick him up and he bit her right hand. He locked his jaws and wouldn't let go. She - who loves her cats more than anything - was forced to hit the cat against the wall to release his bite! Her hand is mauled and such a mess, all swollen. The x-rays showed no broken bones but she'll be on antibiotics herself for days and I'm afraid it will get worse before it gets better. Cat bites are notorious for infection.

On Monday, I would expect the cat to "take a ride to a nice farm in the country" so to speak.
Posted by Queenie at 11:41 AM

So glad that you've gotten a break from the rain.

So sorry about your daughter. I stupidly picked up an injured cat once (without taking precautions) and was bitten numerous times on both hands - about 14 bite wounds total - one set that went into the bone. One of my sons had to knock the cat in the head with a chair (not what I wanted him to do, but at the time it was all he could think of), but thank goodness it only stunned the cat. I was put on heavy duty antibiotics, and given a tetnus shot. The cat was treated for the claw that he lost, and for the additional pain from the knock on the head. Forgiveness was passed all around...and we lived happily ever after. - No trip to a farm in the country...just a trip to his vet and my doctor.

Good about the new friends, feathered and otherwise, scary about the cat bite, and those darn squirrels, we have several of them too. And here's to sunny days in Maine! Yay!!