Chapters one and two... 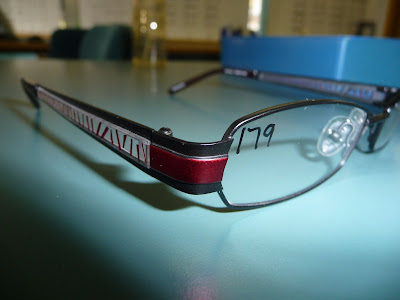 Oh - before I start my story, check out my very cool new glasses! (which won't be here for two weeks.) I bought them at the coolest optician's in St. Stephen, New Brunswick. I knew you'd like them.

Anyway, back to my story...
I think my life is becoming an adventure novel.

Chapter One: Last night, I made a quick trip to the grocery store for lunchmeat and cheese and fabric softener. It ended up taking almost two hours because while I was rummaging around at the back of the store by the baked beans and spiral sliced hams, the fire alarm went off. The store had to be evacuated and then the crazy strobe lights and piercing alarm triggered seizures in a young girl and the ambulance had to be called. The fire turned out to be smoldering microwave popcorn. Isn't it always?

ChapterTwo: This afternoon on a return trip from Bangor, a drunk driver nearly rear-ended me. Then she passed me going about 70 and then I said "Ha Ha!" when she got stuck behind a dump truck. There was no more laughing, however, when she missed a curve, slid through the soft shoulder, overcorrected and crashed into a stand of trees on the other side.
Someone really does protect drunks - she was unhurt. I called the police, kept her from walking into the road every time a vehicle passed, filled out my statement and watched her get handcuffed and taken off to jail. The whole thing - mostly the waiting for the cops to arrive part - took almost two hours. Oh, and when she kept complaining that she had to pee, the officer said she could go in the bushes if she really had to so she walked in front of my car - right in plain view on the side of the road - squatted down on the shoulder and let it go. Geez. I had to absolutely agree with her when she walked over, put her arm around my shoulder and drunkenly whispered in my ear "I'm fucked."

I just can't wait for tomorrow.
Posted by Queenie at 7:09 PM

OMGosh! I'm so thankful my life is dull!!! WOW that is really something though and pretty scary too that folks like that are out driving around. I'm liking those glasses up there too. I may have to get some new ones too. Take care Sharon!!! And Happy Easter! ~Lili

Well, it sounds like you had a pretty eventful day anyway and at least it all ended on a semi-good note.
Here's hoping that tommorrow brings better stuff your way, eh?

I LOVE the glasses... very cool!

You are just a TROUBLE MAGNET!!

i am laughing my butt off right now. excellent novel in the works. can't wait to read the next chapter!

I really love reading about your "adventures". You never fail to make me LOL or cry my eyes out!