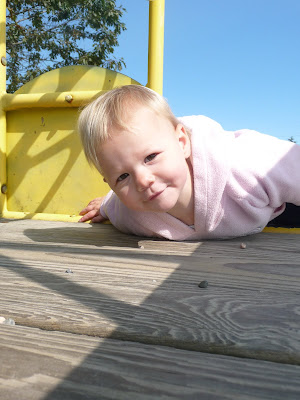 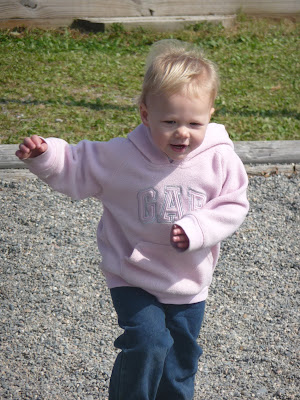 Last weekend Kiley stayed with me while her mom and dad got a bit of a weekend away in Bar Harbor. We had a ball! We went to the library for a bug show, visited the playground at the nearby school, washed windows, picked up pine cones in the yard and had a feast on grilled cheese sandwiches.
But on Sunday afternoon, I did it again. Ms. Clumsiness personified went into the attic to get the Halloween decorations and in my rush to hurry back down the stairs to show Kiley, I fell. I broke my big toe. Actually, I cracked the area at the base right where my poor bunion is.
Damn this hurts. ouch. ouch. ouch.
I've been icing it and taking Tylenol (the ER doc told me that any other pain product inhibits the healing of bones - did you know that???)
I did too much Monday and paid dearly. My foot looked like it belonged to the Stay-Puffed Marshmallow Man. Yesterday I behaved myself and it was much better, although it has turned all black and gray. It still keeps waking me up throughout the night but it better be completely healed for the gang's upcoming trip to Quebec City!!!

Work has been amazing this past week - I found a new trail and beach: Bog Brook Preserve in Trescott. So incredibly isolated and beautiful. I will be bringing ALL my visitors to this one. Interviewed two guys who used to sell fish off the back of a truck and are now launching a national seafood product...and drove to Eastport to interview scallop fishermen (In case you want to know, I got it from the fishermen's mouths that it absolutely is pronounced SCOLLOP.)

I also got unbelievably lost trying to find a fatal tractor accident. The road dispatchers indicated was not on any map or in Google so I headed out blind and kept calling my photo department, other reporters, photographers, even our secretary to help me find my way. Of course I lost my cell signal every three feet so it became really challenging, to say the least.
I ended up on the back of the radar site in Columbia in the blueberry barrens when I should have been miles to the east in the woods. Eventually I spotted a rescue worker and followed him in. A poor young man had lost control of a farm tractor and tipped off the side of a wooden bridge (with no side rails) and ended up crushed under the tractor in the water.

The setting was incredibly beautiful - just feet away was a spectacular waterfall and this lovely bubbling brook was shrouded by autumn colors on the trees....so often I am struck by the raw horror of events that take place in some of the most spectacular environments. It seems so wrong, so inappropriate somehow. We all know that bad things happen to good people...as unacceptable as that is, it is insult to injury when the setting is beautiful. I've stood in peaceful woods while police recovered bodies; by the side of a lovely river, while accident victims were pried from their mangled cars; under flowering apple trees when firefighters collapsed and died at house fires.

I suppose I can find some peace in that if this horrible thing had to happen, let it happen in beauty. But it seems so oppositional - death should not visit in lovely places. It should not walk in gardens; alongside babbling brooks; near stunning waterfalls. It should creep through dark alleys that are littered with stinking garbage....

I am also finding that it takes longer and longer for me to spiritually get past one of these accidents. This boy was 21...what an incredible waste.

Today I have an a.m. interview with an amazing music professor and an afternoon story at a large animal rescue farm. And I'm looking forward to Friday - taking a pottery lesson at a nearby learning center. yay!
Posted by Queenie at 4:34 AM

Didn't know you had to cover those kind of stories, too. So very sad, what a tragic accident. Glad the rest of your times was spent having fun except for the big toe. You are keeping it propped up aren't you? Take care!

I don't know how you do it and keep sane with some of the things you have to cover. I'm sure your little Kiley helps keeps it in perspective for you when things get a little tough. Hugs to you Queenie. And hey, enjoy the pottery class! And come and take a spin on our wheel anytime you need practice!! We're only like a million miles down the road from you though, huh?