picture this....I forgot to give it to you yesterday... 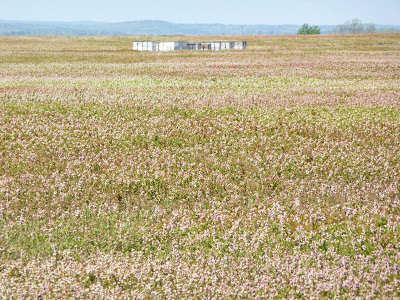 This is a blueberry barren - millions of low (8-10 inch) bushes, topped with blossoms being furiously worked by a gazillion honeybees....Click on the picture and you can actually see some of the bees in the air. Some of the blossoms are white, while others are pink or creme - it depends on the variety of the bush.
Wait until August when I'll take the same picture but everything will be blue as the bushes will be laden with berries. Then I'll take another for you after the frost has hit and turned the fields scarlet. These are wild blueberry bushes (although they are managed by farmers who de-rock the fields so the bushes can spread, control weeds and bring in the commercial bee hives) and Maine - mostly in Washington and Hancock Counties - produces more than anywhere else in the world. There are so many that native bees cannot keep up and commercial hives are trucked in from Pennsylvania. Just before they came to Maine, the honeybees were down south in the citrus groves and apple orchards. When they leave here, they head to New York to pollinate pumpkins.

If you eat a 1/2 cup of blueberries a day, they can help stave off cancer, high blood pressure, heart disease and high cholesterol. Those Native Americans really knew their stuff, didn't they? I prefer to take inoculations of blueberry wine, sweet and cold; or blueberry jam on hot biscuits; blueberry muffins, pancakes, crepes, pies......yummmmy any way you fix 'em. If you don't know the difference, wild blueberries are small berries, packed with flavor and goodness. Commercial, high bush berries are much bigger and plumper but lack the intense flavor.

Some fields are harvested with mechanical processors but most are harvested by hand. Workers, bent in half, use a big scoop with long metal tines. They pass the scoop through the bushes and the berries are pulled off. It is hard, hot work.

And since many of the fields are remote and not near any kind of development, theft is a major problem. People sneak in under the cover of darkness and steal TONS of berries, selling them on the sides of the road as their own. Me, I'd be afraid of those bears that roam the fields (you can't see it, but there is an electric fence around that stack of bee hives in the picture.) I learned this week that the bears aren't after the honey - they actually want the bee larvae. Stupid bears. BTW - we only have black bears in Maine. No grizzlies. Grizzlies skip the bee larvae and go right for the humans.

There. Now you know all about blueberries. And stupid bears.
Posted by Queenie at 7:16 AM

I love blueberries. I found my thrill on Blueberry Hill.... Sorry.

Ooh you took me back to 1983 when I worked for two weeks raking blueberries so I could buy a Levi's denim jacket. The jacket cost $30.00, I got it at Epsteins in Brewer. It took a while to bloom but I think that is where the seed of my work ethic was planted, in a blueberry field in Greenfield, Maine. Though at the time I swore I would never do manual labor again, EVER. Silly little girl.

What a great lesson - can't wait to see the rest of the photo's!

It reminds me of one time in the Fall we had picked our daughter and son-in-law up from the airport and took them through Cherryfield to see the fall colors. Our daughter while looking out the window admiring the brilliant red colors said to us "I can actually still smell the blueberries even though they are past." Our son-in-law in the front seat just turned around and grinned at us and said "me too!" He was munching on a blueberry granola bar.
Now wasn't there something about horses that you mentioned in the title of yesterday's post?

I remember raking berries as a kid in the early 80s. My money went for jeans bought at Farrington's (sort of like Marden's, but just for clothes) over in South China. Miserable work, and back then it was done by children as young as 7, getting paid $2 for a five-gallon pail full of berries that had to weigh at least 18 pounds. Ooof. Now it is done largely by migrant workers, but the bucket price has not risen all that much over the years.