I promised you alligators and I give you Marie Barone... 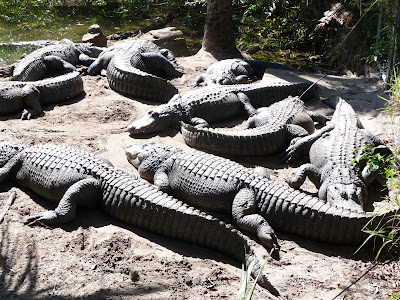 These sunbathing beauties were clustered at the Brevard County zoo....As scary as they are, I was sad they were confined, although I must admit they look pretty well fed! 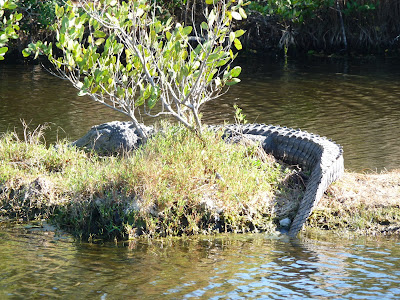 This one was sunning on an island at the Merritt Island Wildlife Refuge. He is VERY free and I'm glad there was a bit of water between us while I took the picture. 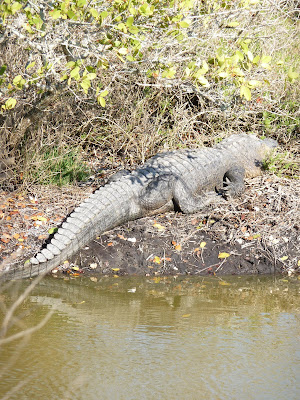 Another sunbather...It was a windy day and nearly every gator we saw was sunning and sleeping.

Today I watched my granddaughter eat her lunch through the magic of SKYPE and the web cams. I got to see her clap when I clapped, she tried to put blueberries in her ear and got stuck pulling her bib off. My daughter said that Kiley suddenly was trying to eat the wall in her playroom yesterday and Faye discovered the little one had found a Cheerio stuck on the wall and was trying to suck it off. My daughter said she was tempted to stick a whole bunch of Cheerios on the wall to keep Kiley entertained! But in the next moment she is confiding how nervous she is about leaving Kiley for two days later this week - Faye and some girlfriends are driving to Boston to go to the aquarium, see a Celtics game and do some shopping. She is also hoping to connect with her cousin from Connecticut (the amazing diving coach) who will be at a competition, and another cousin who is an amazing singer and is performing in clubs around Boston.

I completely understand how torn she is. It's a scary thing: on the one hand you want to be there for every moment with your baby but on the other hand you know that is neither sensible nor the right thing to do. Kiley will be just fine with her daddy, who shares childrearing admirably, and Faye will likely get something she hasn't had in a long time: a solid night's sleep! I offered platitudes but as in all things with my kids, I try not to give open advice (unless directly asked or if I believe someone is in danger) to allow them space to make their own decisions. It's one thing to be there for them, a resource, someone to ask about life's experiences, but I hever want to be Marie Barone, interfering in every aspect and suffocating them. Sometimes, though, when I'm not particularly alert or paying attention, I have caught unsolicited advice just popping out of my mouth, as if it had a life of its own, and I am always sorry afterwards, even if I believe what I said.

I have raised my children; lived my life. It is not up to me to live theirs. Besides, I am so fortunate: they seem to be doing a great job at it! IF they weren't....oh my goddess, I think I could be a great Marie Barone - blabbing on endlessly about the dust on the blinds, the overflowing garbage can, the type of toilet paper they select, how to feed-dress-discipline-raise their children, on and on and on.

Do you mothers and mother-in-laws out there struggle with this same push/pull? Just where are the lines between supporting, advising and interfering? When does wanting to know the details and everyday issues in their lives become nosiness? How honest should we be when it comes to adult children? Do we speak up, and regret it later, or not speak up, and regret it later? Please share your thoughts....
Posted by Queenie at 12:38 PM

I know... it's sad to see the alligators penned up, isn't it? I remember going to the aquarium in SF and standing and watching them for hours and loving it. Today though, it just makes my heart feel sad that they can't live the life they should be living.

My son and his girlfriend are doing a fantastic job of raising her 3 boys, but while we were visiting last year, I did find myself biting my tongue once or twice. It's a hard call. You do your best to raise them right and they turn out just fine - people that you're proud of... yet you find yourself doubting their judgements sometimes.

Oh honey I have Marie Baron for a MIL. She is the queen of the backhanded compliment. The only salvation I have is I'm not Debra, I'm Amy. :)

I say feeding advice to your grown up kid is sort of like feeding them food as a baby...they're just gonna spit it right back out at you and expect you to clean up their mess. I say let them have fun feeding themselves with their hopes and dreams. When they left the nest my job of feeding really was done. Doesn't mean I still can't enjoy them and support them. But I do adore Marie for her ability to keep a straight face and she really is wise, controlling maybe, but really wise.

Wow, I haven't read your blog in TOO long! What horrible weather to come home to after such a wonderful vacation! I'm SO glad you had such a well-deserved break. Oh, by the way, I've considered duct tape over my mouth with MY eldest daughter!! Think of the mistakes we made. They will make their own regardless of our "advice".

Great photos of the alligators, they are such amazing creatures to me! As for children? Mine are 20, 19 and darn near 18 here right away and I am just learning with my oldest to keep a lot of things to myself. She is out on her own, supporting herself and doing well. Some things she does I don't really agree with and when I used to say something she would say "Well it's my decision. Trust me mom." So now I rarely say anything. I trust her, I do, it's just hard to all of a sudden step back after raising them all those years. My poor husband Gregg still feels he has control over everything she does and they butt heads terribly sometimes. I hear the two of them and what he says and it's a great reminder on what NOT to do LOL

T - thanks for your comments. Poor Gregg. He's learning the hard way, eh?

R - I so know what you mean...and yes, YOU wouldn't listen to me either.

Thanks Sassy and Tatersmama for your wisdom and Fearless Nester, what can I say? HILARIOUS - the vision of the spitting food!!!
Thanks all!

Thank goodness, I have good relationships with my kids, and they often ask for advise. I do try to keep my yap shut whenever possible, but sometimes I just have to say something. IT'S USUALLY TO THE GRANDKIDS. Things like, "Please don't talk to your mother that way...one day you will be very sorry that you ever uttered those words. You can always say that you're sorry, but you can't ever take the words back."

Oh to be young again...NOT!