The night of bowling with friends report: 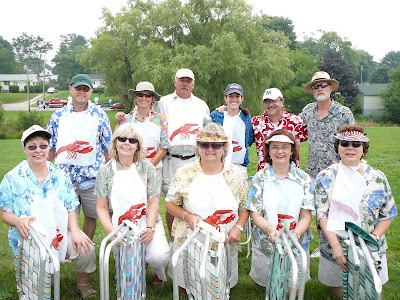 My fingers are so swollen today that I couldn't grasp my coffee mug, my shoulder and back feel like a truck hit me. Somehow I managed to actually make a few strikes through pure luck. The best part was sitting in a restaurant with my friends afterward, talking and talking.

Here are some of my friends and a much less demanding sport: We are the Central Maine Precision Marching Lawn Chair Drill Team. We are amazing and you can find us on You Tube! We practiced all winter two years ago, spinning our chairs, clacking them together, throwing chairs through the air, even sitting down in the middle of the routine. I am the leader (this happened because I was late getting to a gathering where the idea was hatched. It was a default honor) and I have a great whistle! I LOVE blowing that whistle and making everyone pay attention to me. I also have to be bitchy because when this group gets together they tend to stray from the task at hand. We decided on silly Hawaiian shirts and at Rockland we had to take the lobster bibs off because they got in the way of the spinning chairs.
Then we marched in the Fourth of July Athens Street Parade and won first place.
Then we marched in the Pittsfield Egg Festival Parade, where the video was taken, and won first place!
Then we marched in the Rockland Lobster Festival, where this picture was taken (you can't see me here cuz I took the picture), and won first place!
We are Undefeated!!!
It is the most fun - people love us and cheer and cheer! And at the Egg Festival Parade when we passed by my BFF Trudy's house, friends ran out into the street and brought us mimosas! At the Athens' parade, which is considerably more laid back, we were handed jello shots.
This summer we are trying for first place in the Yarmouth Clam Festival and practice will begin in a few weeks.
If you live anywhere near us and want to join, come on down! We are always looking for new members. The routines are super simple and we have a ball.

Of course, it is also a great opportunity to embarrass your children and cause others to wonder about your sanity.
Posted by Queenie at 7:54 AM

I LOVE IT! I Want to join in but am too far away. I'm tellin you Queenie if we ever get together in the 3d whirld it's gonna be trouble!

Now then have you triple checked your suitcase?

Is this for real? You are one wild and crazy woman! Going to Youtube right now. Found it, GREAT JOB! Wouldn't have believed if I hadn't seen it with my own eyes!!

Dang - I want in! I could get a Hoveround, and ride up in front, waving my crutches!
Get to bed early tonight, Queenie...you need to be well rested for your trip. And maybe you should shave, just one more time:)

Sharon: This is a great blog. It oozes personality. Thanks for commenting and mine and inviting me over to yours! I hope to stay in touch. Have a great vacation.
Nancy