It came; it blew; and it conquered. 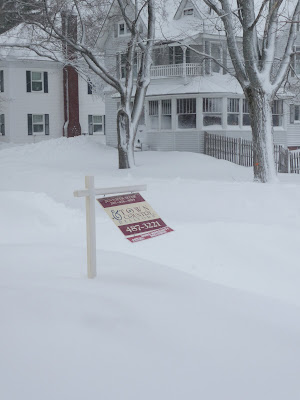 Look at my poor street - the snow is as deep as the realtor's sign and where the hell did the road go? 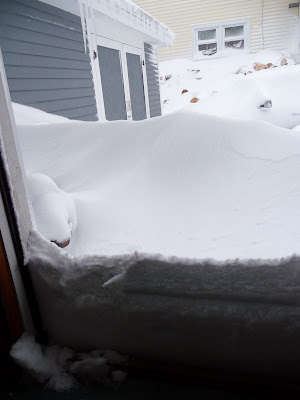 I opened my back door and this is what I found: a foot and a half against the door, six feet at the bottom of the steps and, yes, that is my car back there! I'll probably be driving again about April. 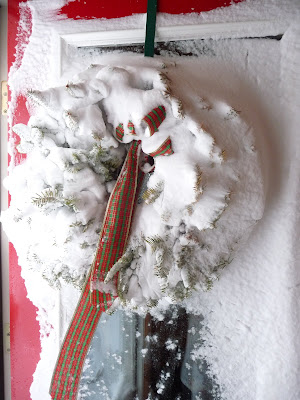 I thought my wreath looked particularly pitiful but then I thought : Why in the world is my wreath still up on February 23?

Anyway, I've managed to shovel off the top two steps of the porch and now I am waiting for the snowblowing man to clear the driveway.

I'm going nowhere today. It's kind of a strange relief when it is out of your control! My daughter called and then sent me pictures of some downed limbs at the Machias house. Nothing major and nothing hit but one HUGE pine limb just missed Matt's car! They got a lot of snow but they also got ice which weighs everything down.

I'm dreaming of Florida and that HOT Wednesday afternoon (was it just five days ago?) spent lazing by the pool...I'd give my inheritance (HA and another HA, there is no inheritance!) for one of those Star Trek transporters. I'd shovel the walkway and then push the transport button, sit at the pool and then come back here just in time for bed.

NAAAAA, who am I kidding? I won't come back at all.
Posted by Queenie at 7:32 AM

You did stock up before the storm - Right? I can't bare to think of you without eggs and cheese!

We didn't get the Alberta Clipper they kept calling for. In fact we are in the middle of a heat wave. 40 degrees and rain today. Strange weather.

Keep warm and just hibernate when you can - it'll do you a world of good!

We've got more bushfires and high temps here, and I'm dreading it. :-(

yep. looked like that here, too. Weather like this in the winter, black flies, tourists and mosquitoes all summer... tell me again why we like it so much here?

Wow that's some serious snow. We just got a couple of inches Sunday and I am ready for some 80 degree weather! Stay warm!

Looks like that groundhog was right in this case! I can't believe all the snow while we are basking in the warm sun.

I'm laughing at your snow covered wreath only because I just realized...mine is still up too LOL