Isn't this the most pitiful thing you ever saw? 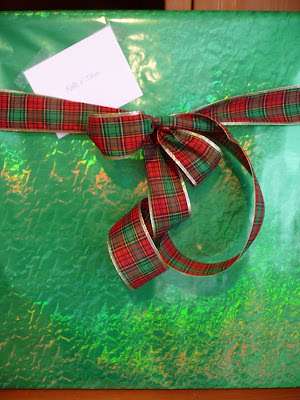 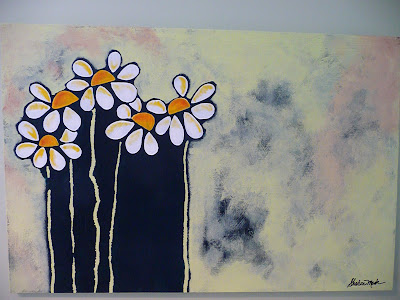 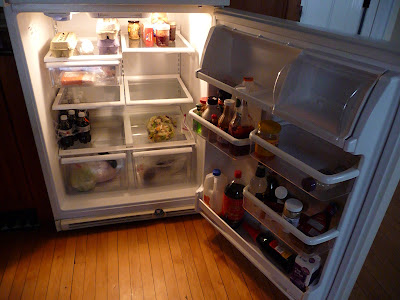 Not the present - the refrigerator.

It looks like an orphaned child. Even the abundance of diet Coke isn't mine - it belongs to Movie Night goers. And the eggs? What is up with the eggs? I have not a slice of deli meat, not a bowl of fruit, no gooey dessert or even leftover lasagna but I have three dozen eggs. And a Ziploc bag of salad. how thrilling...
Please notice the full doors. I loves me my condiments. I have hot sauces, cold sauces, barbecue sauces, the All American Ketchup, hot mustard, beer mustard, Maine maple syrup and horseradish. There's a small bottle of Midori and another of Bailey's.

But also notice my milk is nearly gone, as is the orange juice, and the mayonnaise disappeared two days ago.

I have been busy. Busy playing and painting. I have a bridal shower to attend this afternoon and for the past several days (in between working, yes, boss, I was actually working) I have been putting the finishing touches on a painting I am giving the happy couple. The one in the picture is very similar to the one I painted for them but I forgot to take a picture of the gift before I wrapped it.

I also went to my BFF Trudy's Friday night for dominoes. Now if you haven't played Mexican Train before, here is my advice: get a handful of good friends, throw in a bowl of licorice, a bag of cheetos and at least two bottles of wine and play. It's the kind of game that you can still have a party around, not like cards where you actually have to pay attention.

The moon must have been in a very strange phase Friday night because we never laughed so well. Sue had to turn sideways in her chair to hold on, she was laughing so hard. Everything was funny, we were so silly and even spontaneously began jointly singing show tunes at the top of our voices, like some sort of Broadway chorus gone mad.

John started suddenly speaking in a French accent and wearing one winter glove. Trudy was clutching her heart and talking about some dead dog named Shep. And Royce kept disappearing to fill the wood stove and shouting from the other room "It is my turn? Is it my turn?'' Then, we he got back to the game, it really was his turn and he moaned "Why is it always my turn?"

I want it perfectly clear that I am NOT blaming the merlot but I suddenly developed a temporary paralysis of my fingers and dropped at least four pounds of snacks by my seat under the table. No, my seat wasn't under the table, just the cheetos. There was an actual debris pile under there.

And then yesterday, I still was finishing the painting but was also writing a sermon. Alright, get up off the floor and sit back down in your chair. Every other week a lay person delivers the sermon in our church (we are very poor and can only afford our minister part time.) A few months ago, I wrote one on gratitude and even though I was terrified, everyone liked it and I temporarily lost my mind and volunteered to do another. My topic is love.

Doesn't that sound easy? HA. And another HA. I mean, we've all been in love. We've all lost at love. Done things we're not so proud of in the name of love. Learned to smoke cigarettes and converted religion because of love (oh, wait. that was just me.)

My first love was David Baker in fifth grade. He had brilliant red hair and the most freckles I ever saw on a face. There were so many freckles that they had started to overlap and he was almost one HUGE freckle. He followed me home from school one day and I invited him for supper. My mother, who did not drive then and only had a limited amount of food in the fridge (See? It is genetic, this failure to stock up on groceries thing.) But my mother made it very special, this first time I brought home a boy. She served us in the DINING ROOM - where we only ate on Sundays and holidays - with a TABLECOTH and a CHAFING DISH. The menu? Scrambled eggs. (What is with the eggs again?) But the way she did it up and gave it importance, we could have been having filet mignon and caviar. David Baker gave me a little ring but it turned my finger green and I was so insulted that I gave it back to him in a huff, stomping my saddle shoes in true disgust.

My second love was Jerry Calsetta who took ballroom dancing classes with me but didn't give me a ring. Instead he gave me his band pin, a cheesy brass thing shaped like a G-clef, and again I broke it off. What the heck was my 11-year-old self holding out for? Emeralds?

And then there was Joe. Dear sweet, BMOC Joe, who I met at a dance in 1963, fell head over heels, dated him all through high school, married him 13. 2 seconds after I graduated, bore him three children and then, on one particularly hot ugly summer day, divorced him. I still love that man for who he is, the father to our children he is, the son to his mother he was, but there is no way we could stay together.

And then there was Dan the farmer. Yup, you've got it. Fell head over heels, married him, bore him three children and then took the kids and left him. We are still friends. (Are you sensing a pattern here?)

I'm still the winner in all this broken love, though. I get to eat popcorn in bed with the light on while reading, dressed in a ratty sweatshirt and polka dot boxer shorts and no one whines at me to turn out the light. And I get to spend a whole day painting or writing or, apparently, from the sad state of my refrigerator, eating scrambled eggs. It's the life, I tell ya.
Posted by Queenie at 5:03 AM

Oh Queenie - It is better to have loved and walked, than to never love at all!

Eggs are handy things to have and should not be discounted. Depending on the importance of the occasion (or the guest) they can become an omelet, a quiche or a custard pie. In my younger, more carefree days, I once had unexpected company for breakfast (ahem) who looked expectantly at me anticipating more than coffee and now it's time for you to go. I found some eggs, a few leftover shrimp from shrimp cocktail the previous day, some leftover asparagus and cream cheese. I made an omelet with that, topped it with some sweet-hot cranberry salsa, and that date lasted three days. We did eventually send out for pizza, though.
But don't discount eggs. Valuable to have in the fridge. Very handy indeed.

Oh Queenie I have a video I need to post of my crew playing mexican train. We got so caught up in it that we ended up doing a whole "Stomp The Yard" with dominoes. My kids had never played dominoes so I had to teach them. Well Tadpole can play a mean game of dominoes but she wasn't here. We were knee deep in Flat Tire Ale and Fontera Merlot. We had a blast.

Now for the eggs. You can always make the most elegant dishes with a little bit of cheese some veggies and eggs.

Ahhh Girlie,
You never lose by loving. You always lose by holding back.

My very first boyfriend (Jimmy Shoemaker, grade 4) and I split up because he gave me his fathers watch instead of a ring and I never wore it because it interferred with my jumping rope. Funny, the things men expect of you.
Besides, I laughed when his daddy whupped his butt for stealing the watch in the first place.
The next boy that asked me to go with him (in the 6th grade) said "Hey, so you want to go with me?" and I said
"Go where?".

I KNOW that you can do this sermon - just be yourself and keep recounting those stories !!!

I can't live without mayo the real stuff not light or fat-free and eggs are a good thing. My fridge is more empty than yours. I think the wine did it. Your sermon will come to you, then will you post it when finished?

VaporFi is the best electronic cigarettes supplier out there.