Mr. Barkless and the case of the bazillion homeless dogs. 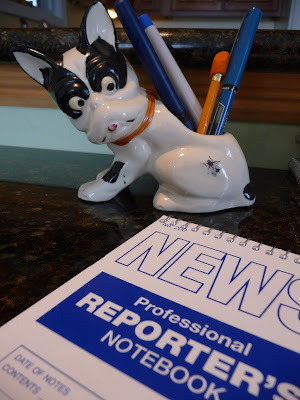 Here is my "walk 100 steps and make a photo" challenge today. Mr. Barkless, who holds my pens on my desk, and apparently is guarding an empty notebook. And can you see that tiny little fly on his stinky little butt? And the outraged look he is giving that fly? Clearly that fly is not his neighbor, his pet, or even his friend. If I were the fly, I'd haul ass.

Since Mr. Barkless is barkless, which likely means he cannot speak either, I'll tell his story:
I was asked to create a "treasure box" for the Bangor Children's Discovery Museum fundraiser a few years ago. The museum provided wooden boxes (quite large, actually, about 12'' high, 18'' long, 12'' deep) to a group of artists and we were left to our imaginations.
I thought I would make it like a doghouse, with dozens of dogs all over it. The treasure box full of "guard dogs" would protect and watch over any child that became its owner.
So I went on eBay and Craig's List and through every bric-a-brac shop within 100 miles and bought every porcelian, china or stone doggie I could find. I have about 100: big ones, little ones, a small dog sitting in a pee pot, two dachshunds with heads that bobble, dogs playing musical instruments and Mr. Barkless...I have dog pins. Dog brooches. Dog medallions. I literally went to the dogs.

Now, I wasn't going to put Mr. Barkless on the treasure box (which would have been covered with broken china and glass tiles in a reckless kind of doggie pattern....upon reflection, what the heck is a doggie pattern?) but I couldn't resist his little face, which as you have already noticed I'm sure, because you have nothing better to do than listen to me prattle on about every detail of my life, his face looks just like my little EMMA! (see my Nov. 12, 2008 post for confirmation of this amazing look-alike coincidence which has nothing to do with the fact that ALL Boston Terriers have the same face.)

And then I changed my mind.

And I did a tea party. A tiny china tea set was on top and it was all done in pink and white and green. It really did come out well and was the second highest cash getter at the fundraiser auction. I did meself proud.

And now I am left with a gazillion homeless dogs. Big dogs. Little dogs. Oh, I already told you that. So, what to do? What to do? I must come up with an art project for a gazillion dogs. And I'm still leaning towards making a whole series of small treasure boxes, each with four or five "guard" dogs - there seems to be a lack of stuff for boys out there. Another idea I had was a sort of mobile, where the dogs sat on flat pieces of glass or wood. It could be for an entry way, again the guarding theme.
Any doggie project ideas out there or am I barking up the wrong tree?

Once again your creativity WOW's me!

Oh and I tagged you for a Meme. Yeah TAG your it!

When you make your small treasure boxes do you smash up all the doggie parts and such and make them into a mosaic piece? If you don't smash them maybe you could drill holes in them to make salt and pepper sets out of the one's that look good together..using corks to plug where you drill holes in the bottom. Or maybe make some soap dispensers out of them. I dunno...guess I'd have to see your collection to envision what would work.

The set of treasure boxes for boys sounds lovely to me. My grandson is struggling with reading and we're trying to find any incentive we can, to encourage him.
Did you take a photo of the tea set treasure box? I would love to see it!

He is SO cute. Love the look he's giving that fly, I do the same thing. Mushu...the pup...runs away when flies are around. The big baby.

OOOOOOoooooooooooh do you have any Pug "treasures"?
You should have included a photo of the treasure box. We would all love to see it.
Love to you Queenie!