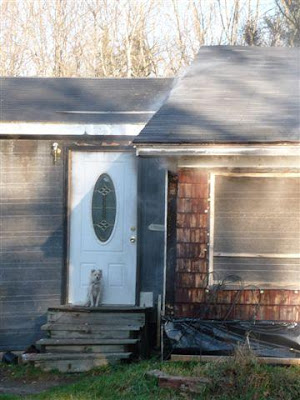 at the door to his family's home Monday - despite the smoke pouring from the eaves. When I took the picture, the smoke was barely visible on his side of the house but it was pouring from the other side and flames were licking out the foundation. But that didn't sway this little soldier. It was his job to watch the door and he most certainly did. It took three firefighters to convince him to move away (he had to be tied to a nearby barn). The house was gutted and the little family that lived here lost everything.

But that is not the real story here. This is the tragedy of what really happened at that fire:

I watched a man die, a hero who died in the line of duty.
Hartland Firefighter Michael Snowman - only 49 - died of a massive heart attack at that house fire pictured here. Mike was a VOLUNTEER - who ran from his job at the local gas company to see what purpose he could serve at the fire.
At first we thought that Mike had just fallen over a nest of hoses. But he didn't get up. And he didn't move. And Scott Noble of the Pittsfield Fire Department began screaming for help. Mike was a big man and it took a bit of work and about four men and women to get him up and sitting on the step of the truck, where he was talking to rescue workers, knew where he was, what he was doing. And then his eyes rolled back and he turned blue. Nothing they did could revive him. There he was on the edge of the roadway, laying in the water spilled from the fire truck, his fellow firefighters just feet away fighting the house fire, another firefighter sitting astride him, doing CPR, and he died.
Everyone at the scene was stunned but kept working, doing what they are trained to do.
About 2 we got the word that he had been airlifted to EMMC but there was nothing anyone could do for him. These firefighters - strong men who lift hoses, charge into burning homes, rescue pets, pull apart cars and trucks to save the injured, scramble through woods, barns, up stairs, down cellars, on rooftops, any where they need to go - these brave men stood on the side of the road and cried. They were devastated and bereft.

Tonight at 6 o'clock, when they run the fire department's test tones over my scanner, they will do a last call for Mike Snowman. Goodbye Mike. You were a hero for more than 25 years to the fire departments you served. I for one will miss you.
Posted by Queenie at 2:26 PM

Thanks for the first hand account of what befell this kind man. As a former rural volunteer I have a special regard for his passion. Rest in peace brother.

My god. Bless you for writing here a version of the events so personal that the paper will never print it. Take care of yourself tonight and in the days that come. Hold Emma tight. We're thinking of you and sending our thoughts your way and to the community there that lost such a vital member. Blessed be.

Just so you know, I confer with Con Edison's Stray Voltage and Public Affairs Units and contribute to Wet Nose Guide and New York Dog Chat.

HOW TO SLAY AN INVISIBLE DANGER.
Blair Sorrel, Founder
http://www.StreetZaps.com

Contact voltage is a chronic hidden hazard that can readily victimize an unsuspecting dog, walker, or both. No dog lover could possibly observe a more horrifying scene than witnessing his beloved pet instantaneously maimed or tragically electrocuted. When you exercise your pooch, please exercise greater prudence. Common outdoor electrical and metal fixtures may shock or even kill your vulnerable dog. And depending upon the current, the walker will be bitten and like poor Aric Roman, suffer permanently. But you can, indeed, self-protect.

Just start to adopt this simple strategy — EYEBALL THE BLOCK, AND AVOID A SHOCK. Take a few seconds and make your trajectory toward generally safer, free standing, non-conductive surfaces, ie., plastic, wood, cardboard. Intuit your dog’s cues and if it’s resistant, change directions. Work site perimeters may be live so try to elude them. If necessary, switch sides of the street or your hands when leading to skirt hazards. If you traverse the same route, you may memorize locations of potential dangers. Carry your pooch when in doubt. Consider indoor restroom products like PottyPark when external conditions are chancy or RopeNGo’s hardware-free leash and harness. And don’t rely on dog booties as a palliative as they will actually put your pet at even greater risk since the dog can’t tell you they’re leaking! To learn to more, please see StreetZaps. A safer walk is yours year round if you are willing to open to your eyes and mind to it.