The clouds stayed away and the moon shined brightly... 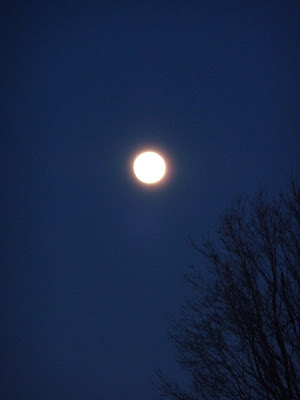 A soft glow lit up the park brillliantly, making the night light so intense that many of the skiers and shoers turned off their headlamps to embrace the night. Even non-skiers went for a brisk walk (which reluctant John called "A FORCED MARCH") Then inside we added a little candlelight and some VERY good food, and, course, some spirits. Here's what everyone brought: corn chowder, lobster bisque, mixed salad, hot crab dip, four loaves of homemade bread, stuffed clams, a compote of fresh fruit, shrimp, mixed berry cups.....wine, wine, wine - boxes, bottles and jugs - peppermint schnapps to go in hot cocoa, and a bowl of Clementines. ahhhhhhhhh 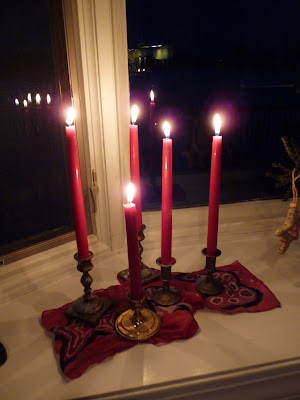 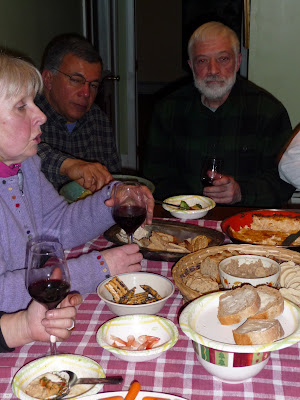 Here is Donna, Hector and John. Notice the poor demolished plates of food...we know how to enjoy, this group does! 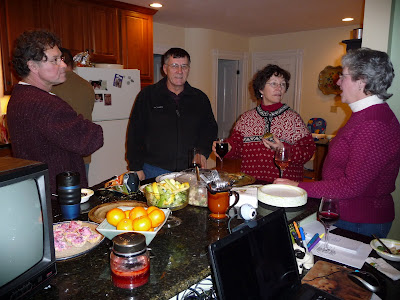 Royce, Tom, Trudy and Alice converged for conversation around some of the food. 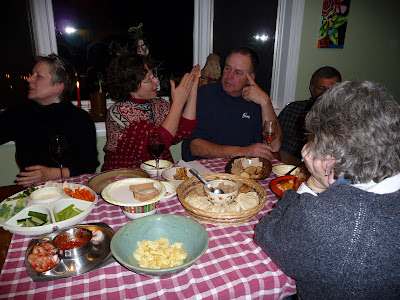 Trudy is telling a story while Renata isn't listening, but John and Sue are.
The porch was strewn with showshoes and the snowbank looked like a porcupine with all the skis standing tall. Inside, Bonnie Raitt, Tracey Chapman and Eric Clapton wailed in the background and it got so hot, I had to turn the thermostat down!

These are the most amazing friends - friends I sometimes feel I don't deserve but wonder how I ever lived without them. Everyone had such a good time that we are going to do it again at the next full moon, right around Feb. 9.
Wanna come?
Posted by Queenie at 4:42 AM

It doesn't get much better than an evening spent with good friends (well, expect maybe an evening snuggled up with any special kiddos in your life. ;-))

That is so wonderful! I would love to have friends like that.

We enjoyed the full moon by playing dominoes and drinking wine with the kids until 2 a.m. then rose early this a.m. to go skiing...well they did I'm in the lodge drinking coffee and reading your blog.:)

All that food sounds sooooo yummy - and now I get to go eat cold cereal;(

Yes!! Oh wait a minute. That would mean I'd have to leave my home and I'm not so good with that *sigh* Looks like a fantastic time, you're lucky to have so many great friends in your life.