My best friend is going to Paris. URK UGH BWAAAA! 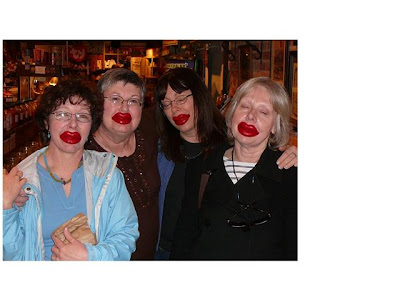 Sometimes the Goddesses travel in February to beat the winter blues. We went to Florida to visit friend Sue - what a great time; and then four of us went to Charlotte, North Carolina (here we are, the gorgeous quartet in the world's most fabulous candy store in Lexington). Notice our spectacular lips - we are nothing if not makeup experts. Also please notice the HUGE bag of candy Trudy has scarfed up. We are (from left) Trudy, The Queen, J and D. Great traveling companions until we got into a fight on the last day about who was going to stash all the wine bottles in their luggage that Trudy bought while on the tasting tour at The Biltmore Estate. There was also disagreement about how many times you can truly go to Krispy Kreme Donuts without people getting suspicious of your presence. The staff there knew us by first name and greeted us joyfully each time we herded through the door.

I'm thinking of heading south again in February or March with D. to visit friend Sue in Melbourne. The lure of the warm air, the sea, the manatees at their wintering spots, a leisurely visit to amazing wildlife refuge, and the cut-throat games of Boggle in the evening with a good bottle of wine on the table - they just keep creeping into my head. It can be a bit disconcerting, especially when the manatees and the spoonbills try playing Boggle in there.

But Trudy can't go this time - she is going to Paris. Yes, there it is. The ugly green monster has reared its head. Not only is she going to the city of Luuuuuuuv, but she is going with someone who sounds fantastic.

Trudy's son D is doing a spring semester of college at the Sorbonne and his roommate's mom, S., is Trudy's companion. S is an amazing woman: smart, lovely, politically active, funny, smart, did I mention politically active (which is like an aphrodisiac for Trudy.) I am totally convinced that she will steal Trudy away and after a year-long tour of the world, they will end up feeding orphaned refugees in Africa and will only come home to protest occasionally on the mall in Washington D.C. She will, of course, call and write frequently at first but the letters will come farther and farther apart and their tone will be more and more distant. Until she disappears altogether, only to be heard from during her annual campaign for food for her orphans every December.
I know that this makes me a horrible best friend, being so jealous of this "new" woman in Trudy's life.

I mean, Trudy is mine. MINE I tell you. And I'm not letting her go.
No, I'm not chaining her to the pipes in the basement.
I won't lock her in one of the spare rooms of the Mansion, feeding her only her two favorites: black coffee and dark chocolate.
I won't feed her amnesia pills and then convince her she is my long, lost sister who is agoraphobic and can never go outside and she is allergic to cell phones and Skype and cannot communicate with ANYONE except me.
I won't write a fake story in the newspaper that the terrorist level is RED and all travel overseas has been suspended.

Oh damn the lure of Paris. Gay Paree. Eiffel. The Louvre. The Arc de Triumph. Driving on the wrong side of the road (do they?). The cheeseries. The bakeries. French horns. The chocolatiers. The gorgeous men. The sidewalk cafes. The countryside, the rivers, the sea, the mountains. French kisses. The sound of the language which makes "I'm can't flush the toilet" sound like "You are the most spectacular creature on Earth." The cinema. The tiny-waisted ladies walking arm in arm with men with tiny pointed moustaches. French fries.
Oh hell.
When it push comes to shove (oh, could I shove her in the backseat of my car and hide her in a little cabin by the lake?) I will of course wish her a safe and wonderful journey, think of her each and every day, knowing that she is on a great adventure and will have fabulous stories for the Goddesses when she returns. She will be a converted Francophile. She'll be wearing a beret and carrying a cigarette in a holder and will constantly be mumbling things like "Merci,'' "au revoir,'' and "oui, oui.'' Her breath will smell like chocolate and she will take to posing with her chin up, while leaning provocatively against a wall, with the smell of French perfume swirling around her. She will move her dining room set outside on the driveway and begin calling it The Cafe. She'll feed her family French soup and baguettes and mounds of French vanilla ice cream.

But at least I know she eventually will come home, not because she cannot live without me or the other Goddesses. But because she will HAVE to tell us the stories...
And she better bring me a present.
Posted by Queenie at 5:42 AM

France is highly over rated. Now Montana! The art, the culture, the cow and elk shit! That's pure culture!

My BFF lives in Loozeranna and we get to see each other once in a blue moon. We used to go on these great girl trips but havent' gotten to do that for awhile.

Oh and just so you know it is now 36 degrees and raining making the 5 feet of snow a big slushi. All I need is some cherry flavoring and I would have something!

Send me a ticket and I'll go somewhere with you...
Or - come on down. I can show you some swamps, bad roads, and hey - 3 count'em 3 different Wal*Marts! It's a balmy 56 out right now and tomorrow it's supposed to get up to 70!

hi! i was sent from neas nuttiness to read about your heating problems. i will be back! i read down a ways but must now head to work...but i did want to add a book to your possible january reading list. i loved "the guernsey literary and potato peel pie society". my MIL read this too and we both loved it. it is just a nice book, no dead bodies, no swearing, sometimes it's nice to read that kind of book.
hugs,
puglette
:o)

What a riot! Nice writing. Breathless pace. Sooooo much fun!

Now think clearly - the trick is not to stuff her in a secret place but figure out how to stuff yourself -- into her luggage!!

O Queenie.....thanks for coming to my site and saying, "O Robynn." Why do those two little words feel a warm blanket on a cold night, even from a perfect stranger? They're very nuturing, mothering if you will, and we can ALL mother each other once in awhile, can't we?

I'm sorry your friend will be gone from you for a bit. I've read some of your writing and will be back for more but rest assured: no one could ever leave someone who writes like you. She'll be back and you'll have to share her stories with us as well. I'm signing on as a follower.

Oh, and do you think Skype is a good venue? I was perusing it the other night and would like to get some of my work out there. Someday, maybe someone will pay me for something (especially if I keep writing sentences containing three words that start with "some" - makes you a hot commodity). Who knows. In the meantime I just have to write because everything that happens to me feels like a story.

Lucky lady! Hey, I bought a bottle of wine about 23 years ago at Biltmore, never drank it, ya think it is any good?

O Robynn, Skype is so easy to install and operate that I heartily recommend it. The picture you see, however, really depends on your Internet connection and the quality of your webcam. I get great pictures of my son in N.J. but blurry ones from my daughter in Machias - with the same webcam. Make sure when you use it that NOTHING else is open at the same time to interfere with the signal. Blurry or not, watching my granddaughter dance when I sing is priceless.....Queenie

Mon Cher Ami, I couldn't live without you and the Goddesses, you know that! This is a trip I HAVE to take to visit Dus, really, it will be merde without you to share donuts, adventures and wine with. How about if I bring a few bottles home in MY suitcase (like I DID in NC and then SHARED the wine with you even if you wouldn't slip ONE bottle into your suitcase). Bon Soir, Reine!

My memory sucks but isn't there a saying...something about setting something free and if it doesn't come back to you it never liked you in the first place? Well anyway. I probably got that all wrong :o) I just read Trudy's comment. Sounds like she will come back...with prezzies!

ativan without prescription cost of lorazepam 1mg - 9 mg of ativan