Here are the birthday kids... 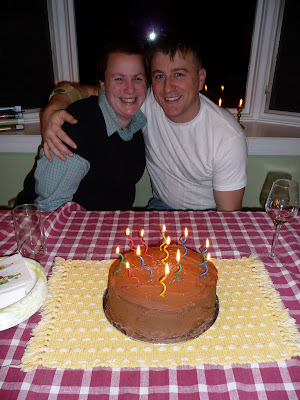 Faye (almost 28) and Daniel (almost 31) were born on the same day, three years apart. WAAAAAY back in 1978, when Daniel was born, Connecticut had a horrible blizzard. Really bad. So bad, the Governor closed all the roads to everything but emergency vehicles. OF COURSE I went into labor. My father in law was chief of OB-GYN at Hartford Hospital and he made it there through all the snow just in time to deliver his first grandchild, who, I might add, peed all over him. That was Feb. 2, Ground Hog's Day. (Which was so odd and bizarre and made for wonderful jokes because we had a hog farm!)
Fast forward three years, and I had a BIG birthday party planned for Daniel with about 24 people expected, when I went into labor again. My mom came over to watch Daniel, I went to the hospital about midnight and Faye was born in the wee hours of the morning, also on Feb. 2. I let them weigh her, do the Apgar and then I brought her home.

They have remained very close always. Daniel was a BMOC, football star, etc., and he threatened every boy in their high school to watch themselves around her and it got to the point she couldn't get a date. He was crushed when she began dating, cried when she left for college, wept at her wedding and is DEVOTED to her daughter, the famous Kiley. He was the first family member (besides myself who was already there!) to make the drive north to see her when she was born.
Even now, when they are supposed to be grownups, they slip into this silliness when they are together, talking to each other in movie dialogue and retelling every, every, every story from when they were growing up. They SKPE each other almost daily and he has been known to drive two and a half hours just to have lunch with her and then turn around and drive the whole way back. They both brag about each other to anyone who will listen.

They are brother and sister, yes. But even more than that, they are best friends. What more could a mom ask for?
Posted by Queenie at 5:18 PM

Great looking kids. What a great thing to have siblings as friends. Humm who would have thought that concept possible when they are fighting in the back seat of the family car? I'm glad you go to spend it with them.

Great looking grown up children! I always say it's the one thing I'm most proud of and that's how great my children get along. My son and youngest daughter especially have a close bond and it's pretty cool to watch as they get older. This gives me hope they could remain close even years from now. Happy early birthday to Faye and Daniel!

Oh Queenie...This post brought tears to my eyes. How I wish that my kids had that kind of bond!
Happy Birthday Faye and Daniel. I wish you both, happiness, health and wealth (as long as you share it with those you love)!

They sound like twins just separated at birth. That is what Libby and I are! You know how close twins are. I think that is nice to be so close. Nice looking kids! Sounds like the party went well and that you all could be together.