Okay, the party is over. Take off your tutu, Trudy, and put that feather boa away. 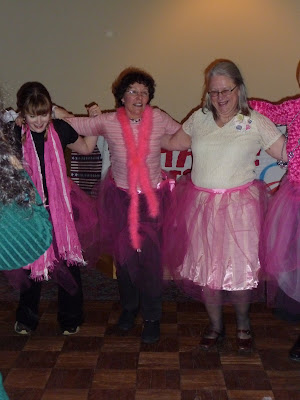 This morning I can't help but think about the first morning in the White House, how the Obamas are waking up on Pennsylvania Avenue (By the Way, how did Pennsylvania get THE avenue, anyhow? Why not Maine Avenue? How about the PEOPLES Avenue, or something a bit more regal like QUEEN's WAY? or BRING YOUR PROBLEMS HERE Road... )

First, the little girls probably weren't able to get past the Secret Service to jump on the President's bed. Did they have to root around in their Hello Kitty nightgowns to produce verifiable identification? Or have they had little microchips inserted behind their ears like their new puppy will have? The SS can wave a wand and declare "Yes. These are the REAL presidential daughters,'' as opposed to some alien, robotic, sent by Iran to blow up the WH daughters.

Inside the Obama's room, there was that lovely white, off the shoulder gown Michele wore to the all the D.C. balls, crumpled in a pile on the floor. (Didn't she look like a bride in it, completely outshining hubby? I would KILL for her legs and don't get me started on her shoulders!) Obama's tux was draped over the shower rod and let me tell you about Michele's bedhead do. Well.
Anyway, I can imagine the Prez, rubbing the little sandman grains out of his eyes, turning to his First Lady and asking "What's for breakfast?"
Immediately, 741 security agents escort three chefs to the foot of the bed, because - of course - they have bugged the Presidential bed with invisible listening devices. And don't even let your imagination go there...

Each chef has a scroll and reads the offerings:
Eggs Benedict, your honor and honoress.
South Western Omelet, sire and madame.
Grits and cheese, your holiness and the queen.

Does Obama go to breakfast in his boxers? Or does he have hot, low slung pajama bottoms (OOOOPS I digress...)?
So after cornflakes and skim milk, the slim duo head off to .... where? What exactly happens on the first day of the rest of America's life?
I hope the first thing they did was hold a voodoo ceremony to rid the W.H. of bad karma. I hope they burned smudge in every room and had a parade of priests, ministers and seers come through to exorcise the place. And then I think Michele would busy herself with rearranging all the furniture. Since the W.H. has about 82 gazillion rooms and most of them are pretty damn ugly, lets be honest here, she has her work cut out for her. Since the girls already spent three THREE THREE hours learning flower arranging a few days ago - a skill that will definitely help them deal with the press over the next four years - they are probably already pretty bored. Today could bring bowling, movies or just roller blading through forty million loooooong hallways - all without leaving home.
As for Obama, I bet it was like an ice water bath to look out the window and realize, this is it baby. The Presidency. I wonder if he ran for the bathroom. For sure he must have taken a few deep breaths.
That's what I'm doing. Taking a few deep breaths. Today is a new beginning. A second chance to get it right. I feel like we won the lottery, we found the pot of gold and the silver lining. (Could I use any more cliches?) I was driving down Interstate 95 in Maine when the oath of office was delivered and I admit freely that there were tears just a flowin down my face. I had to scrabble on the floor for some kind of tissue and all I came up with was an old, used, Kentucky Fried Chicken napkin with a mummified French fry tucked inside. Cars were actually stopped along the Interstate to hear his speech. I called my BFF Trudy and we had a little cry and then got off the phone so we could hear him.
Later in the afternoon, there was a party at a nearby bowling alley and the pink tutus came out andTrudy danced the "Yes We Can-Can For Peace" and everyone was crying and laughing and so, so hopeful.
What a hard, hard road this beautiful young president is on, the road to reclaim America for its people. To invite the world into the process of finding peace, stabilizing the economy and bringing respect, dignity and honor to every citizen of the Earth.
But first, Mr. President Obama, go down the hall and hug those little girls. Play a game of Candy Land. Tell them to make their beds and practice the latest jumping rope rhymes. Kiss your wife and tell her how spectacular she looked last night. Rub her aching dancing feet.
And then get to work. We have a looooooooooooooong way to go.
Posted by Queenie at 4:51 AM

It feels like when the Red Sox won back in 04. I am exhilarated and exhausted at once. Dumbfounded. Boggled. Happy, humming just because. There is work to be done, but it doesn't seem so tough with the team of people willing to help. Shoulder to the wheel everyone, and push!

How do you come up with this stuff? I didn't vote for the man, and after reading your post, I want go dance with him. You are just too good. Wish I had just a fraction, of your way with words. Keep smiling Queenie - it brings happiness into my life!

I am ready for a new dawn, a new era and a new voice. I just hope that people will keep their expectations of Mr. Obama within the realms of reality. I mean after all some of the stuff I have heard recently is really out there. I really don't think Mr. Obama can magically make my extra 30 pounds dissappear while smoothing the wrinkles off my face. :)

They are a beautiful family and I wonder too if they turn to each other and say "Can you even BELIEVE this??!!" I bet it's pretty overwhelming but if anyone can do it they can.

I'm with you on ridding the WHite House of the past 8 years. They are indeed a beautiful family. I pray for them nightly. I cried at the speech. He shows so much promise for our United States of America. We have to remember it will be one day at a time to correct this mess we are in. Good job, Queenie !!!!