I have a problem and I need your help, I have this painting that I began a while ago, 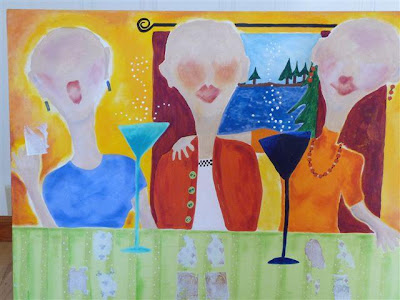 It is my two best friends and myself drinking martinis and playing cards (story to follow). But the problem is this: should they have hair?
Now, you might think the problem is that they have no EYES, but I already know they need eyes - leaving them blind AND bald would just be wrong.
There are a bunch more details for me to add but this painting has been hanging around now for a while and I'm getting awfully attached to those bald heads. I want you ALL to comment - honestly. Is bald beautiful or should I cover those domes toot sweet? EVERYONE NEEDS TO COMMENT so I'll know.

Okay, the story....
We went partying one summer night to a lakehouse nearby. There were about five couples and me (I'm always the odd duck single friend that they drag along with them to show how accepting and tolerant they are.) Anyway, we were all playing cards, GOLF is the name of the game, and my BFF Trudy, on the right in the painting, decided to make chocolate martinis.
She had these VERY tall glasses and she rimmed them in cocoa, swirled some melted chocolate around the inside of the glass, filled them with fabulous martinis and then dropped a chocolate in the bottom.
Well, everyone had said politely "No, thank you" when she offered but she put the glasses in the middle of the table and - enticed by the CHOCOLATE not the LIQUOR I'm sure - we all began sharing them. (I know, but we figured all that alcohol would kill the germs.) OMG, these were the best drinks we had ever tasted! And the portion in each glass was deceptively large...

About four or five refills later, Trudy stood on her chair and declared that she was henceforth and forevermore IMMUNE to martinis, and K, my other BFF on the left in the painting, called her hubby an asshole for passing her bad cards. K's sister had to be helped to the car by her husband.

SOOOO - please comment on the baldness dilemma. I've been pulling my hair out over this.....sorry for that.
Posted by Queenie at 10:02 AM

Tough choice but I vote for hair. Great story!! Can't wait to see the finished product.

OMG! I absolutely LOVE these bald beauties!
I vote for just eyelashes on at least 1 of them. (Or maybe well placed eyebrows). Love the cheeks! I know when I get drinkn' with my BFFs the top of my head goes numb so it makes sense to me.... You, my dear, are very talented.

Those martinis WERE delicious, I'm going to have to make more of them for our next gathering seeing that I am still immune!

We've had so many friends who have lost their hair, could our bald heads be in solidarity?

Those martinis WERE delicious! I'll have to make them again since I'm still immune.

I'd argue with you about the chair standing but there are photos. If I remember, I was celebrating a last minute WIN!!!!!

So many of our friends have lost their hair, maybe we could stay bald in solidarity.

Baldness? Brings me to my knees. I have such a thing for bald men. I know. I am so weird. But onto the gorgeous painting!! I think if the painting represents the night the three of you had a whopping good martini time....and you had hair that night....then I vote for hair. But what do I know. I love bald men. I really like the colors in the painting, I hope you show it when you're done.

Huh. I'm going to get thrown out of the "artsy fartsy league" one of these days. Being gay just isn't enough to qualify any more. One is supposed to know about such refined things as art... I liked it as it is. I could see three women having a whooping good time. Eyelashes, maybe; eyebrows, perhaps; maybe even noses could be added, but I like them as they are. Making them look too much like you and your friends would almost take away the universality of what is being portrayed - friendship and togetherness.

Hello from warm sunny Florida, at least it is today. I kinda like them bald. Neas Nuttiness is my really good friend.

I kinda like them bald... like the painting "The Scream." Of course, GW can't keep his hands off a bald head (see many, many pix on www.dependablerenegade.com), so given how you feel about Bush, maybe hair would be a good idea after all.

I agree that a little indication here and there is warranted...eyelashes, brows, a nose. But not universally for all three, if you know what I mean. I love the gesture of hilarity! I would say, if you go for hair, make it stylized, almost hair-in-movement, so I see you tossing back in your giggles!
Bald is beautiful too. Perhaps try adding a few facial details and take another look.

Some laughing eyes, but Trudy is so right. Please leave them bald!

I think that I must vote for hair. I'm kind of old fashioned when it comes to art. I'm a boring "stick in the mud",and proud of it!