Made it to Machias and back - here are some scenes from my Christmas: 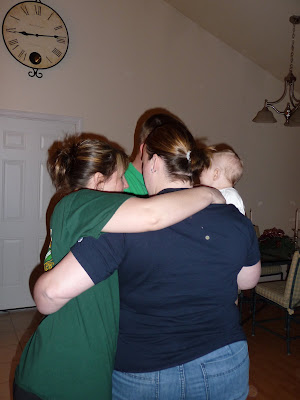 My kids really like each other, in spite of their bizarre childhood on a hog farm....group hugs when they get together are spontaneous and repeated often. I think they are plotting a takeover here. Either that or someone needs some advice about a personal problem. "Yes,'' Faye is telling Amanda. "I like Colgate best.'' "No,'' says Danny. "Crest is the one.'' Kiley, with only two teeth, kept out of it. And don't pay any attention to the clock and be worried that Kiley is up WAAAY past her bedtime. That clock has said the same time for six months. Those kids. They don't answer their cell phones either! 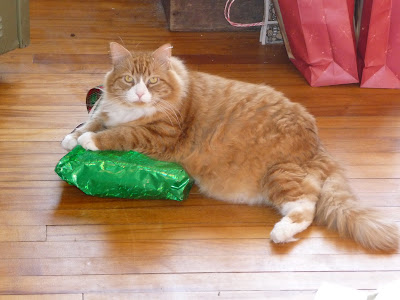 Faye's cat Orange claimed Matt's sweatshirt present for himself. He weighs about 24 pounds so we didn't put up an argument. Besides, he clearly is giving me the evil eye. I know when to back off. 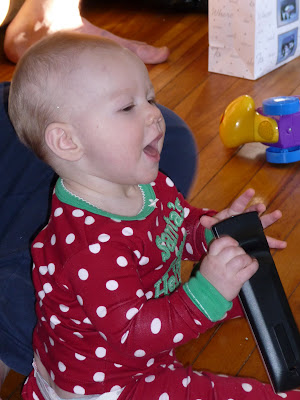 It appears that Kiley's favorite present was her own remote control so that she would stop ordering movies from the real one. 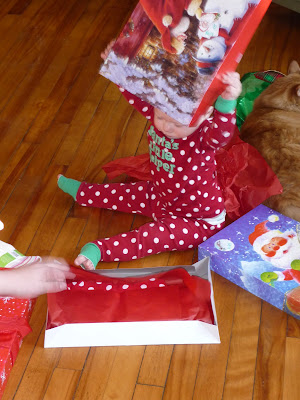 There was a great sense of disappointment when she found more polka dots. "What is the matter with this family?" she asked. "Haven't you ever heard of stripes?" 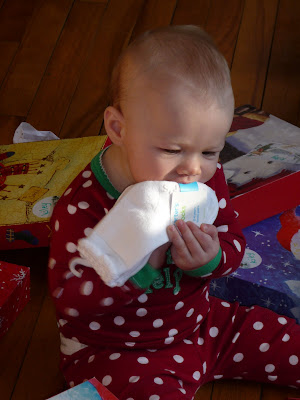 The day was saved with some really good tasting socks. They were followed by a bite of a beef stick from Dad's stocking, a mouthful of wrapping paper and a few needles from the Christmas tree.
Posted by Queenie at 11:33 AM

What a cutie! Do they ever stop putting things in their mouths?

How was the drive?

I've got to agree with Neas Nuttiness on both counts here. :-)